During the time before latest release of highlight.js 6.0 I decided — for the first time in more than 4 years — to actually look at other highlighting libraries. Sure I knew of their existence before but nonetheless never felt compelled to do any serious comparison because highlight.js is a fun project and I'm quite happy with the result. In fact this comparison has also been made for fun more than for anything else. I just wondered how actually good (or bad) highlight.js was looking among similar libraries.

I decided not to take into account highly subjective things like visual appeal (I'm not a good judge here), installation simplicity and documentation clarity (don't know how to measure them). Also I didn't evaluate number of supported languages. While it is a measurable quantity it doesn't mean much for an end user: if a tool doesn't support the language you need you don't care about dozens of others that it does support. Instead I concentrated on universally measurable things that make sense to everyone: size, speed and correctness.

Why "completely unfair" then, you ask? Because I knew who'd win before I even started :-).

If you go to trouble of searching the Internet for "javascript syntax highlighter" you'll inevitably stumble upon hoards of posts all ingeniously similarly titled "N useful/beautiful javascript tools" where N varies from 4 to 20-something. Those were circulating the network for years but, predictably, aren't a very good source of information because they don't actually evaluate usefulness or beauty of solutions they link to.

So I've just picked up those names that I've got used to seeing around in blogs and forums where people try to find such a tool:

I've compiled an enterprisey-looking matrix of features supported by these libraries. It isn't intended for comparison per se because there are different use-cases and sometimes lack of features is a feature too. It's here to give you a general idea on what goal each one can serve.

The test page consists of code snippets using 7 popular languages: Python, Ruby, PHP, XML, HTML, CSS and Javascript. The "completely unfair" part of the article shows up here full-scale since those snippets come from highlight.js' own test suit! Anyway I think it was a good idea to use them because they were designed to be short and to exercise as many features of a language as possible. Here are four versions of the test case using highlight.js, SyntaxHighlighter, SHJS and Google Code Prettify in all their styled-by-default glory.

All libraries have their way to include only required languages definitions on the page: simple linking to language files, on-demand loading, packing into a single file. Also all of them provide minified/packed production versions of files. Gzip compression wasn't used for no specific reason. The following table shows the overall size of all Javascript needed to highlight test snippets.

I didn't include CSS into calculation because it's not actually required: a site can define highlighting style within its main stylesheet.

To be honest modern browsers have made this test irrelevant. All highlighters are pretty fast to the point where highlighting is applied instantly. The only exception was SHJS that was configured to load language files on-demand which led in a couple of test runs to raw un-highlighted code being visible for a split-second. It doesn't tell anything bad about the speed of SHJS itself but rather shows that on-demand loading was a bad idea for the task.

I've measured the speed of highlighting using Firebug. It wasn't as straight-forward as counting size because there are more things to take into account here. After some tinkering I've decided on the following method:

Here is where things get interesting. Size and speed turned out not to affect user experience significantly but the difference in richness and correctness is plainly visible. There won't be any numbers though, just some notes.

I should note that the notion of "correctness" differs from library to library. While there are plain bugs there are also missing features that could be left out deliberately. Here I tried to adhere to my personal views on the subject and you may well be in disagreement with me. That's fine!

SyntaxHighlighter doesn't produce very rich highlighting to begin with. No Python decorators, no Javascript regexps, no CSS @-rules etc… Also it seems to being downright unable to highlight things that require more sophisticated parsing than a regular grammar, like names in function and class definitions. This is not bad by itself. The result still looks useful and leaves fewer places to screw up :-). But there are some issues with correctness anyway:

Not much is highlighted in Javascript.

SHJS was looking promising since it uses language definitions from the GNU source-highlight project and I thought those guys would do their job rather meticulously. But in practice it mishandled highlighting the most of all others:

Class inheritance (A < B) in Ruby breaks the whole line.

Google Code Prettify works very well both in terms of richness and correctness. It can highlight CSS and Javascript within HTML, recognizes Python decorators, Javascript regexps. Speaking of the latter, it was Prettify where I borrowed ideas on how to implement those in highlight.js.

That <not> inside CDATA shouldn't be highlighted as tag.

As for highlight.js, it's pushed down to the end of the comparison for a reason :-). Obviously there won't be any correctness issues since I used code snippets from its own test suit which it successfully passes. Of course it doesn't in any way mean it's bug-free. But where the library really stands out is highlighting richness. It just knows much more about languages than others. Here are just those features visible only in this very test case that are unique to highlight.js:

Some of the recognized features (like variables in PHP) are deliberately not styled to maintain visual sanity. Most of these features (and those in other languages) are the result of elaborate effort of many highlight.js contributors in defining most intricate parsing rules (just look at Perl definition for example). 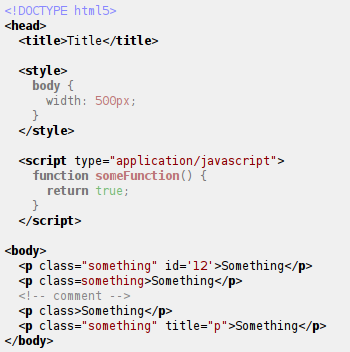 HTML with emedded Javascript and CSS. All sorts of ways to define tag attributes are supported.

If you need a solid syntax highlighter (and don't care about line numbers or striped backgrounds) use highlight.js. It is small, fast, rich and correct!

And if you don't like something about it — contribute!