It's been a while since I stopped going regularly to work. And while I really needed this break it also had its negative consequences, I forgot how to work using my brains. Many, surely, know this state of mind when all the good intentions and wonderful ideas are stopped dead by almost physical inability to force oneself to begin doing anything useful as soon as you sit to the keyboard. And you end up uselessly browsing the web all day long.

Today I started fighting it.

Every weekday I dedicate two hours (from 3 to 5, if you wondered) to writing posts for this blog. The task is not exactly hard but undeniably a creative one. This way I hope to train my brains once again to work regularly and concentrate on a single task for somewhat prolonged periods of time. 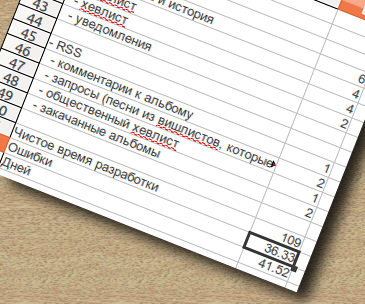 This is hardly a new idea, and there's probably even a fancy name for it, I don't know. What I do know, however, is that it works well for me personally. During the Spring of 2006 when I was working at dcdnet.ru (a closed music community site), I made myself an hourly schedule and worked for good 4 hours a day. Every night I would correct the schedule to match what was actually done and include in it whatever new things I learned about the task at that day. In other words, it worked exactly what Joel Spolsky described in his "obsolete" article Painless Software Schedules.

The thing is, this was one of my most productive periods during my whole professional career. And also one of the most satisfying because there's nothing better for a programmer than watching his work coming to fruition in a real product.

Also this experience affirmed me in my view that people who consider scheduling of creative work impossible either didn't try to do it in earnest or just aren't as good at this job as they think of themselves. But that's a whole 'nother story…

As a "side effect" of my effort there should be new interesting articles in this blog. I certainly am not going to publish daily, as some posts require much more than two hours to write. However I do have a back log of drafts to publish. On MS Surface, on the fate of OpenID, on how Facebook is breaking the Web, on role models in technical careers, on hiring programmers…